The lead up to Race week

Challenge Walchsee European Middle-Distance Triathlon Championship’s was the race that was never really meant to be. I decided after Ironman Wales in September 2015 to have a year off training following 4 pretty intense years training going from not being able to swim, to do doing 4 Ironman’s in 24 months.  I simply was not going to have time to train, as I took a new job in July 2015 which was a global position involving being away from home more, and I had also set up my PT business in the March of 2015 and was busy building a client base outside of regular working hours which meant I no longer had my evenings and weekends free to train myself.

I was still exercising during that 12 month period but nothing with any focus or technique so i wouldn’t class it as training.  The closest I got to speed work was teaching SPIN classes or the occasional running track session with clients.  When I got an email saying I had been chosen for the Team GB age group team for this race, I decided why not, even though my fitness was nowhere near racing standard.  I had 12 weeks to train for this, but factor in holidays and taper, and it basically meant I have 9-10 week of time that I actually train.  I decided that due to the short notice I would focus simply on building distance and ignore and speed work at all.  I Managed to build up swim, bike and run, to the full race distance with about 3-4 weeks left before the race, and I knew this was fine to get me around the course.

We were originally going to make the race a full 2-week holiday in Austria, but due to work commitments and getting a new puppy shortly after finding out I had qualified we decided to cut this down to a 9-day road trip instead in our VW California Camper (Ernie II).  We travelled over to Austria on the Tuesday before the race, which took us 17 hours so Wednesday was our rest day, chilling out and I think we went for a little swim in the lake.  The rest of the week we did bits and pieces of training and full loop of both the bike and run courses – we were stunned by both. 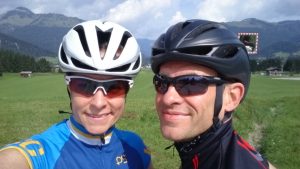 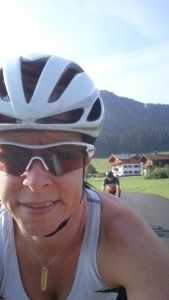 Before we knew it, 4 days had passed and the race day was upon us, we had the usual Saturday race briefing, Team GB-AG photographs and bike racking, once that was done, it time for a relaxed evening and early night.

Alarms went off at 6am following a good night’s sleep. This race was a 9am start which meant for a really relaxed morning lounging around drinking coffee and eating porridge.  It was really misty over the lake again but the forecast was for hot conditions so I decided to slap on some P20 and hope for the best.

Over to transition, and still at this point, no nerves or excitement to race at all. Just felt a morning of a club bike ride.  When I discovered my head set was loose in the bike though, that got the adrenal kicked in. Luckily a lady next to me had some full size Allen keys so I could unloosen and then fully tighten the head set again properly, drama averted!

Nothing left to do but get into my wet suit and make my way over the swim start. 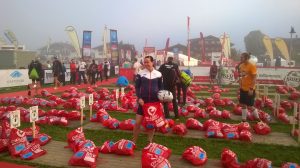 Standing at the swim start, still no nerves or excitement! I am usually quite calm for races, but I do get excited even though I don’t suffer nerves, but nope, today, absolutely nothing, still felt like a training day.  The swim was a rolling start, so I plonked myself in the 35-40 min category, way behind my race PB of 31 minutes but hey, I had only been swimming about 20 times all year so going under 40 would make me happy!  Very uneventful swim, lovely lake, and for once, I swam dead on course, my GPS track looks like it was drawn buoy to buoy with a ruler even though its on high sensitivity and I know from training It does show up the wobbles. 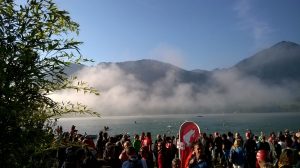 Ran out of the swim, saw Mark cheering me on, and ran through to get my T1 bag and get to the tent, quick wet-suit removal, on with bike shoes and helmet and off I ran to my bike. 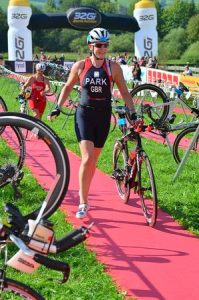 Bike (03:08:52)
The bike course is beautiful; we had ridden one loop so knew it was a very hilly one but worth it for the views.  I still didn’t feel like I was in a race but I thoroughly enjoyed it.  One lady in particular I saw a lot, Elizabeth would pass me on every climb (well I am carrying an extra 10 kg this year) but then I would pass her on every straight section, I was tanking along the straights but my power deserted me when the road got a gradient.  I was taking the down hills cautiously too as I have only been on my new bike TT bike outdoors 4 or 5 times so knew my handling of it wasn’t the best, needless to say still clocked a max speed of 70km/h, it really was a great course.  Was happy to push a little harder on lap 2 and get a faster second lap time, coming up to the dismount line I saw Mark again cheering from the street with Sharon a friend of mine who was also there supporting. 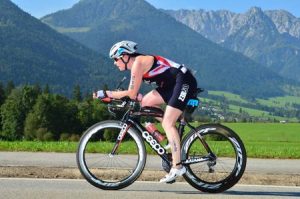 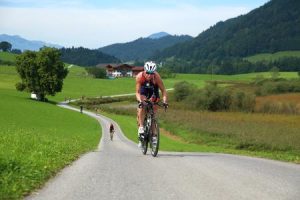 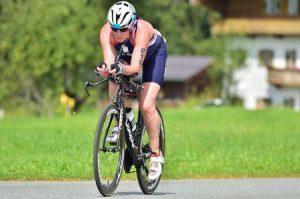 I felt great in T2, I had ridden better than I had anticipated in the leas up to the race, and was happy to get out onto the run.  Took a bottle of BCAA’s with me and off I went. 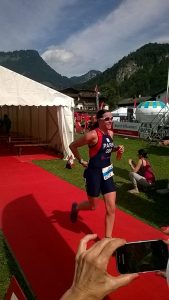 The run course is 4 laps around the lake, which a couple of shallow but unforgiving hills.  There were two aid stations on each lap and I decided I would walk each one and get as much water into me as I could as by the this point it was scorching hot, around 28 degrees and no shelter at all.  Each aid station I walked the length of the tables and littering areas then trotted along again, the first lap was tough as I hadn’t done any proper brick sessions all year.  On the second lap, I started looking at the time and realised if I did each run lap slightly fast than the first I would come in under 6 hours.  Having expected a time of closer to 7 hours, this really surprised me so I decided to use everything I could comfortably go sub 6.  This meant walking a shorter distance in the aid stations and dropping to one cup of water instead of two and trying to grab sponges and cool off whilst running through them, I also tried to slightly up the overall pace of each lap too.  This plan worked well and I actually felt better and better each lap, I didn’t have to ‘dig deep’ or want to but knew now, that aside from any incidents I would finish sub 6, so I enjoyed the last 2 laps passing people comfortably and enjoying the course. 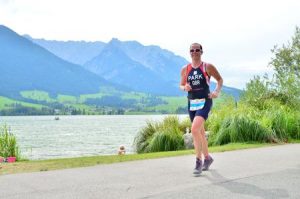 At the finish line I was pleased to get my medal and t-shirt and over the moon with my time, nothing to write about in terms of my usual race times, but all things considered this year I had surpassed my expectation but a long way, and that’s all I could ask for. 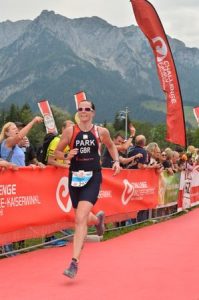 Having a year off has definitely benefited me, its made me have the most relaxed race of my life, loved every minute of it and having had no DOMS or fatigue after it, shows if I wanted too I could have pushed much harder, but this year wasn’t not about putting myself in pain so I am pleased I did the race I did and very proud of my result.

What’s next?  Quite a few big plans for next year, some people know that I’ve been talking about a lot of different races; Celtman, IM Wales again, and lots of other things.  Going to wait a couple of months before announcing my 2016 plans but I think a few people will be quite surprised! :o) 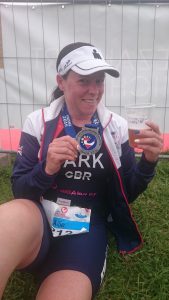