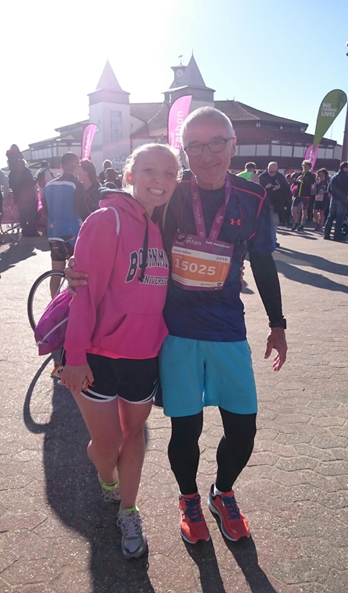 All you need is trainers and a Springsteen sound-track – My first Half Marathon. Will it be my last?

I read the event information on Friday and it was clear that this was a race, not a fun run. They seemed very keen to make the point.
I didn’t sleep well that night. Nightmares about being naked in public, the usual anxiety stuff. I did have a bit of a lie in though, up about 7.30am on Saturday.
Breakfast was cereal and a banana and coffee. I then spent the morning pottering about doing the usual domestic things. Lunch was stir-fry vegetables, noodles and tuna with fruit as dessert. I was trying to eat the rights things to feel properly fuelled for the race.
The training plan said to have a 15-minute, gentle run on Saturday. It had been raining on and off all morning so I decided to wait. I had some peanut butter and an apple mid-afternoon and then noticed that there was a break in the clouds. So had my run. Eating peanut butter 10 minutes before exercise was a mistake. I felt it heavy in my stomach and I felt a little sick. Not a good pre-race feeling.

Now for the boring stuff

I was back home around 11pm and had a final check of all my stuff.
Trainers, music on ipod, running clothes all ready, then bed.

Up at 3am. Not really hungry but forced some cereal down and got in the car around 3.30am. Roads were pretty clear. It always amazes me that there is anyone else on the road in the middle of the night but there was enough traffic that I had to concentrate the whole way.
Arrived in Bournemouth around 6.30am. I had my first surprise on the drive up to Samantha’s, daughter and running partner, place. She had assured me that Bournemouth is flat, no hills. I’d built this “fact” into my plan for the race. Samantha’s apartment is on a hill by the way!
My second surprise was that Sophie, Samantha’s flat-mate was also running the half marathon that morning. And Sophie’s boyfriend Alex had kindly offered to support us all morning which he did in a friendly manner throughout. 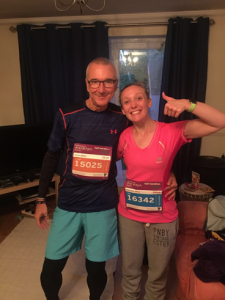 At 7am we walked over to the starting point about 2 miles away. We encountered several hills on the way and soon the banter between the four of us was about the revelation that daughters lie to their fathers. Sophie was much more supportive of Samantha saying that Sammy has a “selective memory” rather than lying.

Oh, and its cold. We all have tracksuits etc to keep us warm on the walk down to the start but once we strip off to running gear the cold hits. We give our bags, with our personal number tag attached, to the teams who will deliver them to the end point some 13 miles away. Well a couple of miles for them on the lorry but 13.1 miles for us on the run.

I note that many of the experienced runners are wearing foil blankets given to them at the end of previous events to maintain warmth now and other are wearing bin liners or large clear plastic bags for the same purpose. We jog to keep warm.

The start is divided into several pens where runners who have estimated similar race times are held together in a staggered start. I’m in the orange pen while Samantha and Sophie are just behind in the blue pen. This seemed odd to us as Samantha is a better runner than me and the consequence would be that we wouldn’t be able to run the race together. This was disappointing but I decided to focus on my race. I had a plan and I intended to stick to it.

The only real stress at the start was that my ipod refused to select the playlist I had prepared for the run. However, after a few tries and then just letting is rest it started on its own with about 5 minutes before the starting gun. I let it play and tried to keep warm. A gentle jog with those around me down to the start line, start the watch and off I go.
The plan was to run the first kilometre in 6 minutes and then increase to 5.45 pace for the next 4km and I got pretty close to the planned pace. I felt fine and knew I could run faster but was also aware that I had a long way to go. I started to wish I had gone to the toilet before the race started but the queues had been long. I didn’t want to stop now as I knew it would affect my time but it was on my mind.

And then Samantha caught me up at 6km. She had been running around 5 minute per km pace and was excited that she had found me. It felt great, the sun was shining weakly, I had warmed up, Samantha was here, what could possibly go wrong?
For the next 2km we continued at 5.45 minutes per km pace but when I tried to increase the pace as per my plan I was unable to sustain the increase and by the 14km distance I had slowed to around 6 minutes per km.
The wind on the seafront and a wicked hill in the town then took their toll. My heartrate went up to around 175bpm from my normal running heart rate of 140bpm. It took 20 minutes and another 3km for my heart rate to recover, which happened as I slowed down. While this was happening to my body I was also suffering mentally. I knew I should run my own race and keep focused but my pace was increasing and decreasing along the seafront to try to deal with the wind and as I became more tired and runners started to overtake me and made me feel worse.
I was getting slower so I felt that I was holding Samantha back. I decided to tell Sammy to go ahead as I was struggling.

For the next 5 minutes I trudged along the seafront aiming for the first of the two piers in the race. 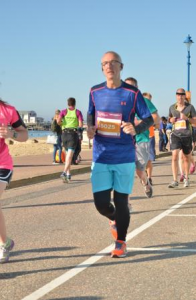 I wasn’t sure where the finish was and everything seemed to be so far away. In hindsight I should have learned where the finish was and I should have checked my watch for distance travelled earlier. The various mileage markers were confusing and in this tired state I had convinced myself I had a long way to go.
I checked my watch at this point and saw that I had covered 19km.
Wow.
I was both gutted that I wouldn’t get under 2 hours for the race but also instantly revitalized and started to run with renewed vigor. I had energy and enthusiasm and felt the heaviness in my legs go. With about a kilomtre to go I caught up with a guy I had been chatting to earlier. I slowed to reassure him that we were nearly there and ask how he was feeling. After a couple of minutes with him I picked up the pace again and raced towards the finish. I realized now that the end was to be just beyond the pier as I could see people running up and then down the other side. As I reached the pier I was flying, rattling down the wooden pier at under 5 minute per km pace. 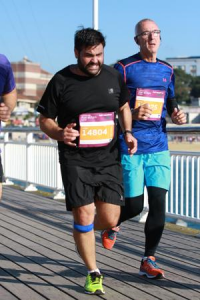 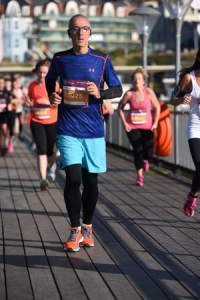 And then I saw Samantha ahead of me. I caught her up and we ran hand in hand for around 100m waving to the crowd at the end of the pier. As we saw the finishing line I let go of her hand and Samantha crossed the line very closely followed by me cheering and waving. 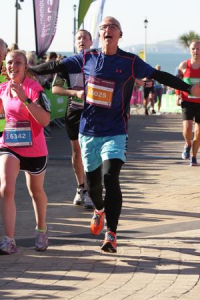 Getting to the finish together
We both then followed all of those runners ahead of us in a happy daze as we collected our medals and goodie bags and were bustled out into the warmth of the central park in Bournemouth. I didn’t feel the need for a foil blanket so we drank the water we had been given and waited for Sophie on the crowd side of the finishing line. 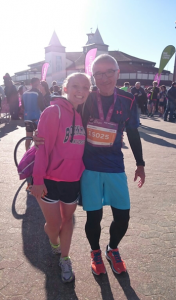 Happy to have completed the race 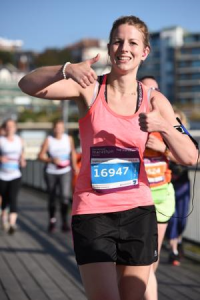 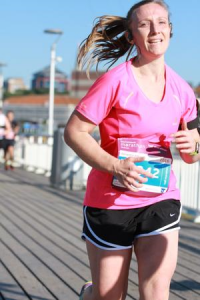 We collected our kit-bags from the storage area and walked back to the flat watching the elite marathon runners as we went one way and they went the other. They seemed so skinny and fast.

Once we’d all recovered and the girls had showers we walked back to the pier again and had lunch and an ice-cream, just a normal leisurely Sunday afternoon.

At the start of the year I had struggled to run 5km in 32 minutes and my best ever time had been 28 minutes, quite a few years ago. During my training this had improved to 5km in 25 minutes. I had never run further than 10km before September 2016 and even then I had thought it was just too far. I had never run the full 21.1km, not even in training. So I on balance I should be content that I had completed the distance. But a week later I’m still disappointed.

I had let a lack of focus and mental frailty in the latter part of the race impact on how I performed. I should have been clearer on my own race-pace and race geography and ignored everyone around me. And I should have been aware that I was feeling tired because the race was nearly over.

It was a great running experience and an excellent learning experience. If I can do it with some proper structured training support and personal dedication to the training, then anyone can. I had remembered an old martial instructor saying to me “train hard, fight easy” and I had used this as motivation in the 4 months leading up to the event. I had listened carefully to the advice from others who had completed the distance; run your own race, think of it as 4 separate 5km races etc but in the end my lack of mental stamina had been the issue, not physical stamina.

In answer to some of the questions posed by this event

Could I run faster than a 28-year-old? – NO. Samantha recorded a personal best time, was able to run and catch me up and then sustain a disciplined pace, awesome.
Would I go off too quickly and blow up? – well, sort of. I certainly blew up and it should have been avoided.
Is all you need trainers and a Springsteen sound track? – YES, but warmer disposable outer layers at the start would have helped. I should also have turned up the volume when I was feeling low rather than just feeling sorry for myself.
And is this my first and only half marathon? – NO. Samantha and I are planning on running together next year.
I ran the race for me and as a response to my daughter’s suggestion and I’ve written this piece from my perspective.
I also used the race to raise money and awareness for Macmillan Cancer Support.

My Just Giving Page is https://www.justgiving.com/fundraising/Simon-Adkins
So far I’ve raised around £750 through the generous support of friends and colleagues. If you have enjoyed this narrative and would like to donate, please do. It’s a great cause.

I would like to thank everyone who has supported me over the past months. There are too many to mention personally but thanks to friends and family alike. To everyone who has helped with training, advice, planning and diet and to the many long suffering ones who had to endure my endless stories of what I’d just done in training.