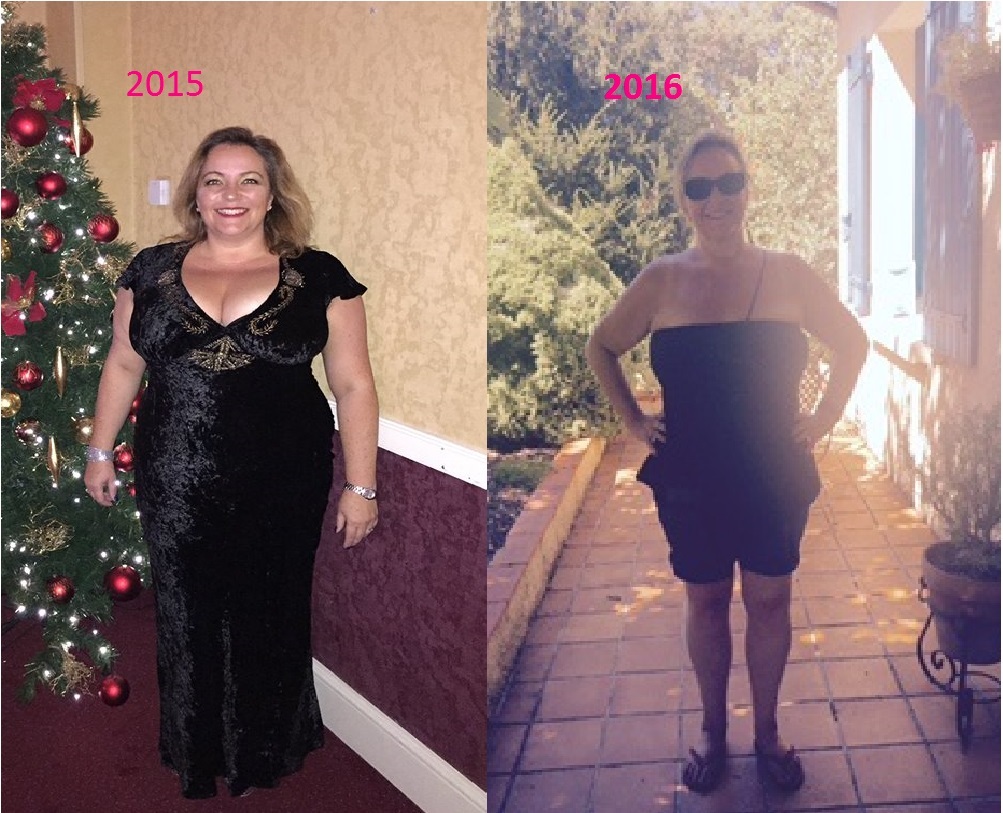 In December 2015 I was invited to join the Peace Hospice Pounds for Lbs sponsored weight loss program as a PT Coach & Exercise Adviser. Little did I realise what an inspirational and motivated bunch of people I would meet and becomes friends with.

Now it is November and preparations are underway for the £’s for Lbs program 2017 so I thought it would be a great idea to catch up with Mel Mack one of the ‘biggest losers’ on the 2016 program for an update.

Q)     Mel, Can you tell us a little bit about yourself and why you decided to join the pounds for Lbs programme

A)     I’m Mel, aged 45, and externally I’m a confident and successful professional, a lapsed northerner, happy person with lots of friends and family around me. Mostly I’m like that internally too, but have struggled with my weight for years and despite numerous half hearted and serious attempts, have never managed to get on top of my health and fitness. I’ve spent the majority of my adult life between the sizes of 18-22, and it’s the only part of my life that has consistently seemed beyond my control.

I love entertaining and being entertained, travelling to new places, work long hours in digital advertising, sing on the side and have an 8 year old daughter. I’ve used every excuse in the book to justify why I don’t have the time/energy to concentrate on it.

In 2015 I broke my ankle badly, and after a complex duo of operations ended up non-weight bearing for 11 weeks, knocking out the whole summer. During that time I put on a stone from lack of activity, lost any fitness I had previously and was incredibly frustrated with not being able to get around under my own steam as I like to do. It hit me hard and basically made me realise that if I didn’t both recover from the injury and also swing the pendulum firmly in the direction of healthiness, I was headed for a middle age of gradually reducing mobility and feeling like an old woman before my time. I knew that 2016 had to be my year to get a handle on it before it got too late and my recovery began a long physical slide downhill.

I live close to the Peace Hospice and it’s well known for doing great work in Watford. Various of my friends and neighbours have done Push it for Peace before and as I saw an ad for the Pounds for lbs and thought this could be a perfect way to kick start my year. Raising money for a good cause as a carrot, the potential social humiliation of not succeeding as the stick, seemed to be a potentially perfect combination to get me on track.

Q)     So you signed up to the pounds for lbs programme. What was the first meeting like?

A)     A bit awkward at first, about 15 people not knowing what to do with themselves smiling shyly at each other as Tracey and the team made them feel welcome and sat everyone down to listen to how the programme would work.

Within a very short time we were all made to feel really comfortable and I was encouraged to hear that the plan was to give us loads of both practical and personal support. Weekly meetings with motivational speakers/chats, the constant support and advice of both a personal trainer and also a nutritionist, plus membership of the local gym for the duration of the challenge.

The main hurdle was the initial weigh in which was horrendous as expected (seeing the number in the scale, not the experience as it was very discreet) but after sitting down and listening to the success story and tips of Jane who’d won the previous year, and having a bit of a chat with a few of the other attendees I left feeling motivated that things could only get better from this point onwards.

Q)     What do you feel made the pounds for lbs programme different from the other attempts you made to improve your health and fitness?

A)     Partly the fact that it was for more than just me. Having tried and either failed early or eventually in the past I knew that my own willpower wasn’t always going to be strong enough to keep me going through the hard bits, and the thought of letting other people down was a strong motivator to not wobble this time. Also after even the first week there was enormous personal camaraderie between the participants and the Hospice/health and fitness team.

The other ‘losers’ were supportive and encouraging, and Tracey from the Hospice was a huggable delight, Allie an enthusiastic bundle of energy, encouraging multiple free ways of adding movement to our everyday lives, and Linda the tenacious and committed proponent of a new and different way of eating that made so much sense and fitted well into my own preferences (I’ve always been a cheese rather than sweets person).

I felt like I was learning something new each week that I could put into practice, and after the first 2 weeks I started to look forward to the meetings to catch up with people personally too. We all joined a private Facebook group to keep in touch and swap stories and help along the way, which added to the strength and consistency of the support.

Q)     Despite your success, there must have been some low points.  Can you tell us about you’re the highlights and low points you experienced along the way?

A)     I’m constantly battling my inner ‘sod it’. I haven’t managed to change my wine habit much at all and at least once a week I end up drinking far too much and accidentally eating something I shouldn’t which then brings on the self loathing and desire to just give in. Plus there are plenty of days when I weigh myself and I’ve randomly put on weight for no apparent reason (wine!!) and I get demotivated about the whole thing. Usually I try to look at the graph of my weight loss at that moment to give myself a boost, and remind myself it’s a long game and there no point hating the process. Plus I’ve started to schedule in a long run on the mornings I know I’ll be going out that evening so I buy myself a bit of calorie leeway without destroying the overall trend.

Even after all these months I’m still officially ‘obese’ and when I catch myself in a mirror I’m often cross that it’s taking so long and I’m *still* not the lithe thing in my imagination. Whenever I’m on a low like that I tell myself I’ll give it one more day before I give up, and then it feels less onerous. Normally the end of that day I’ve managed to drag myself back to a happier place and then the routine begins afresh.

Q)     You have done amazingly well and your friends and family must all be so proud of your achievement this far.  What is next for you?  What are your short and long terms goals now?

A)     My short term goals have changed over time. First it was to lose a stone, then 3, which I’ve now managed (still slightly gobsmacked about that) and my next goal is 4 stone lost which will mean I’m officially overweight and no longer obese according to bmi measurements. It’s a blunt tool but that will feel like a watershed moment for me, especially as I haven’t been this weight in nearly 30 years.  Long term also changes. Right now I plan to learn how to maintain over the winter, and then start losing again on Spring and aim for a dress size 12/10, but I’m happy to take it as it comes as just staying the same is an achievement compared to previous attempts.

Q) We have no doubt you will be in that size 10/12 for your summer holidays next year, you truly have worked so hard for this and come so far already.  Any final words of advice for anyone that might consider signing up for pounds for lbs 2017 or those going it alone on their weight loss journey?

2)     be kind to yourself as you’re going to slip up. Unrealistic expectations will guarantee failure. It probably took years to get where you are so don’t expect miracles this week

3)     accept that it’s harder for some people than others. I spent years being cross that some people didn’t have to try as hard as I seemed to have to do, but that anger created defiance & self destructive attitudes and it was only myself that lost out due to that. Accepting it means you can then make a plan to address it.

4)     move more. Just take every opportunity of using the stairs, a longer walk, a bit of dancing, running about with the kids, cycling to the station. Added together these things can be the difference between losing and not. Do remember though that although exercise is fab and I’ve got really into it (surprisingly) but food is 75% of the formula so don’t expect to Zumba yourself thin. It can take an hour to work off a slice of pizza-it’s SO much easier to just not eat the pizza in the first place!

5)     low carb was what did it for me – literally NO cravings due to removing the sugar roller-coaster and being able to snack on cheese or pork scratchings – who knew??!!! It may not work for everyone but there IS a food plan that will work out there for everyone, and don’t assume it’ll be the same as others. Some like 5/2, some do low fat, some calorie count, some do keto. The point is to choose the one that fits best into your likes and dislikes as forcing yourself to avoid something you love or gorge on something you dislike is a road to failure. Small tweaks that create a system you can stick to easily for the rest of your life seems to be the only way. I’m now in my 8th month and not only have I enjoyed the process but I’m totally happy to think that I’ll only ever have chips or pizza a few times a year for the rest of my life as the results have been/will continue to be worth it.

Thank you for time chatting with us Mel, we wish you every success in the future.

HOW TO GET INVOLVED

If you are currently looking to lose some weight and improve your eating habits and fitness in a group environment whilst raising money for an amazing local charity, please contact me for information.